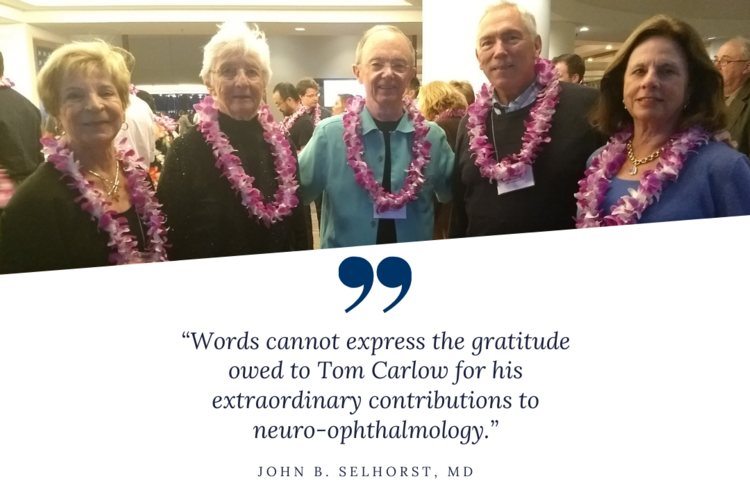 Words cannot express the gratitude owed to Tom Carlow for his extraordinary contributions to neuro-ophthalmology. He began in 1975 with a desire to inform general practitioners about neuro-ophthalmology when he organized a ski meeting to attract them. He coined the meeting of the Rocky Mountain Neuro-Ophthalmology Society, designed the format, and invited accomplished colleagues. Enjoying the academic discourse and being fun, they often returned. So, he invited more of them. Keen also to the value of CME credits and the need for independence, he had the symposium incorporated in 1980. He then reached out to neurologists and ophthalmologists. He was also astute enough to allow the meeting to evolve, renaming the symposium the North American Neuro-Ophthalmology Society in 1986.

The meeting continued to grow from a hundred or so to hundreds of attendees. Many members honed their teaching skills and expanded their research interests through these meetings. International members were welcomed. Tom’s steady guidance and judgment supported and promoted the joint symposium with the American Academy of Ophthalmology in 1989, poster presentations and merger with the Frank Walsh Society in 1991, assumption of the responsibilities for the Journal of Neuro-Ophthalmology in 1994, and the hiring of a professional management company in 199. Tom also funded an annual research award for the best young investigator’s presentation at NANOS in 1997, initiating charitable contributions from members that has become a strength to NANOS. Research presentations have flourished since then. Thus, with the combined efforts of many NANOS leaders and members, NANOS evolved today into the image of many esteemed professional societies.

With deep sadness, Susan Carlow has related that her husband Tom died on March 15, 2021. After they had shared coffee in the morning, he said he was tired and wanted to rest. When she returned from errands several hours later, she found that he had passed.

Many have contributed to the subspecialty of neuro-ophthalmology, but no one has contributed more than Dr. Thomas J. Carlow. May he rest in peace with the achievement his efforts have provided to so many through the North American Neuro-Ophthalmology Society and its members.